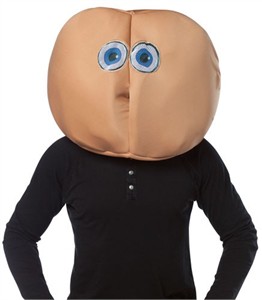 To the left is the basic ass costume that is a headpiece shaped like a butt that one wears on their face. The headpiece has eyes on it, which really makes it come to life. It may seem a bit creepy, but the humor of this funny adult costume overshadows its disturbing factor. If you want an ass costume that has more of a personality, then you can choose from other ass costumes.

The kiss ass costume has red lipstick marks all over it, while the punk ass costume has spiky purple hair. If you were never gifted in school or just generally make poor decisions, then the dumb ass costume featuring a pointy dunce cap would be the right adult costume for you to wear. If you are instead a brainiac, then the smart ass costume with glasses and a graduation cap is more ideal for you.

Click here to browse through all of these adult funny costumes that are the most hilarious adult Halloween costumes!

Halloween is fast approaching and you still haven’t found any cool costumes that will  make you stand out at the party. Whether you’ve yet to come up with any good Halloween costume ideas or are just beginning your search for adult costumes that you could see yourself wearing, we’ve got some cool celebrity costume ideas for you. You can see all of our celebrity costumes by clicking here, but in this post the Gangnam Style costume will be the focus. 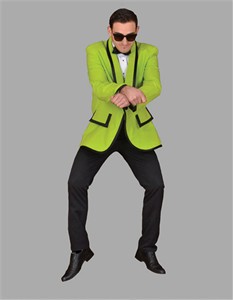 Do you want to be as popular as the South Korean pop star PSY at the costume party? An international sensation, PSY managed to get the Youtube video with the most hits. And do you know what music video it was that put him over the top? Everyone’s seen it: Gangnam Style! If you think you can step up to the challenge and pull off PSY’s awesome dance moves, then wearing one of our gangnam style costumes is the right choice for you. This pop star costume consists of the gangnam style jacket that PSY wears in his music video. These gangnam style jackets come in a array of colors: dark blue, green, pink, white, and light blue. This Korean costume is simply the coolest of international costumes.

The October 31st holiday certainly isn’t just for kids. You may no longer go trick or treating, but wearing adult Halloween costumes is just as fun as getting free candy. Check out all of Gangnam Style costumes and you will find yourself a cool Halloween costume that will blow everyone away!

Halloween is right around the corner and you’re frantic. You still don’t have your Halloween costume yet. Now it would be simple to just go to the store, browse the limited collection of costumes on the shelves in that one, single aisle, and be forced to buy something mediocre. However, you are smarter than the average bear and decided to use the internet instead to look for scary Halloween costumes. Good choice! But now you’ve got another problem. With so many choices out there when it comes to scary costumes, you are having trouble choosing between all of the best Halloween costumes there are. Luckily, you’ve come to the right place. We’ve got some great scary Halloween costume ideas for you. Today’s idea is simple: skeleton costumes! Wearing an adult skeleton costume may not seem that original, but rest assured that these are unique Halloween costumes that will give everyone a good fright.

To the left is just one example of our skeleton costumes. Click here to see the grave robber costume. When you wear this scary costume, you’ll be the epitome of living dead! You will appear to have escaped from the cemetery in order to get your revenge. People will at first run away out of fear when they see you, but they’ll return to tell you how awesome your skeleton costume is!

We also are full of couples Halloween costume ideas. The graveyard groom and boneyard bride costumes is just one such idea.

Check out all of our skeleton Halloween costumes here.

Halloween is October 31st. I know what you’re thinking right now. Either 1) “Duh, everyone knows that” or 2) “That’s forever from now. I’ve still got plenty of time to find my Halloween costume.” For those whose thoughts were along the lines of #1, there is a point to be made here and those who fall in the second category maybe you don’t understand how close that date is. October 31st is next month so now is crunch time for finding Halloween costumes for you and the other members of your group. So now that you realize the gravity of this matter, here’s a Halloween costume idea for you: zombie costumes!

“Zombie costumes? What’s so special about dressing up as a zombie? That’s so old school and has been done plenty of times before. I want a costume that stands out…” Bear with us, please! We’ve got some zombie costumes that take an unusual twist on what you would normally think of when you an envision what a zombie is. 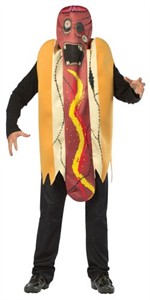 Take this hotdog costume for example that doubles as a zombie costume. You’ll become a part of a very exclusive society of the living dead who were grilled on the barbecue, covered in ketchup and mustard, but then thrown in the trash for whatever reason. Who would dare do away with a perfectly cooked sausage with the right combination of condiments? You will gain sympathy points with this sob story and be the monster who has a heart!

If you’re a vegetarian or simply don’t want to dress up as a piece of meat, click here to see the zombie banana costume that is a potassium-rich outfit that you can wear instead.

This banana costume and hot dog costume are the most delicious and certainly the best zombie costumes around!