Halloween 2013 may have just passed, but that doesn’t mean that dressing up in costumes is over for the year. On the contrary, the costume-wearing festivities have only just begun! Now that it’s November there is a new holiday to look forward to: Thanksgiving! That means it’s the season to get your Thanksgiving costumes in time for November 28th! While everyone enjoys eating the macaroni and cheese, yams, cranberry sauce, ham and green bean casserole, everyone’s favorite food on the Thanksgiving table by far is turkey! Do you know what’s more fun than eating your food? Wearing it! That may seem like an answer a child would give, but don’t be ashamed. When you wear either of our turkey costumes, the spotlight will be on you. Don’t be surprised if everyone comes after you with a knife and fork while waiting for the table to be set for dinner! 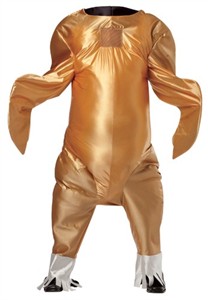 To the left is the adult turkey costume that will make you look like you just came out of the oven! This food costume is more than just mouth watering. It’s simply hilarious to look at! Not only will you be the cause of stomach growling, but also of lots of laughter by wearing this adult costume.

If you prefer to appear as a turkey that can be found in the wild, then we have another Thanksgiving costume option for you. Click here to see this alternate turkey costume that looks like the animal appears before it’s been cooked, complete with eyes, a beak, and feathers.

Get your gobble on with these turkey costumes that are funny costumes everyone will love!